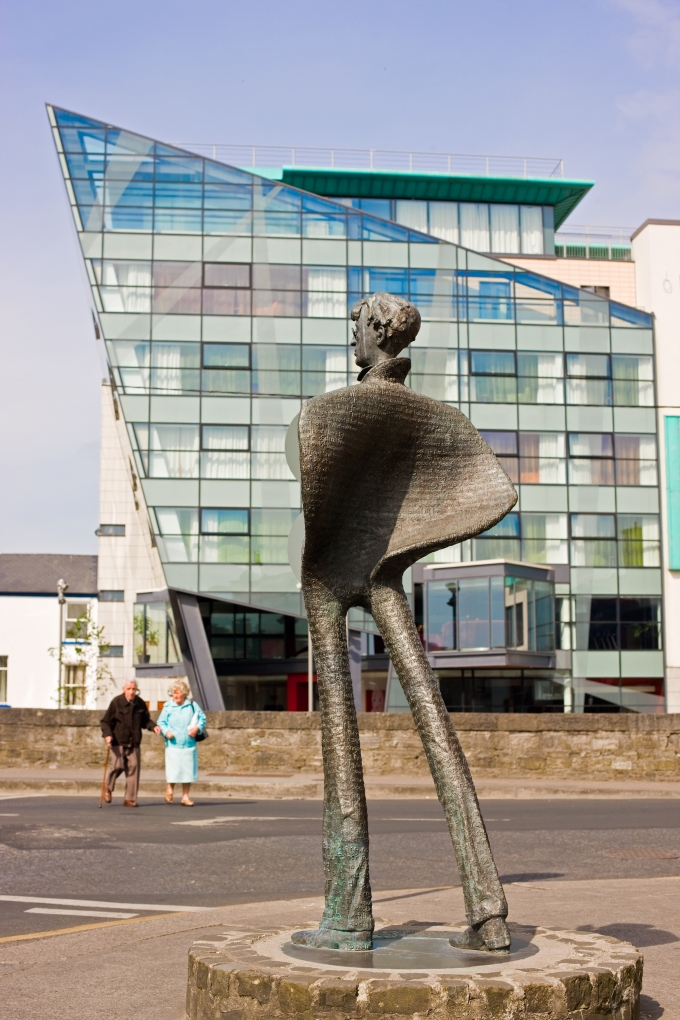 THE larger than life bronze sculpture of W. B. Yeats was officially unveiled by Senator Michael Yeats, the poet’s son, in front of the Ulster Bank building, Stephen Street, in May 1990.
The eight-foot tall statue combined a realistic image of the internationally acclaimed poet with an abstract body, and was imprinted in positive relief with “cuts” from more than 150 of his poems.
The cobblestone plinth on which the sculpture was mounted was made from stones handpicked on the Sligo quays.
The sculptor, by Rowan Gillespie, was unique in that it was funded by the Ulster Bank and the local community. The project was initiated when a committee was set up in 1989 to erect a commemorative sculpture to the poet to mark the 50th anniversary of Yeats’s death.
When Yeats accepted his Nobel Prize in Sweden in 1924, he commented on how the 17th Century Royal Palace of Stockholm reminded him architecturally of the Ulster Bank building in Sligo.
The then chairman of the Ulster Bank, Dr. George Quigley, said it was only fitting that “we continue with association and maintain the contact which Yeats had with Ulster Bank.”
Dr. Quigley said that Yeats was born in Dublin and was therefore an adopted rather than a native of Sligo but there could be very few men whose place of adoption had taken such deep root in their hearts and lives.
Continuing, Dr. Quigley said: “From Yeats’s letters, it is clear that during the 80s and 90s of the last century, when he was in his twenties and mostly lived in London, he went to stay several times in Sligo, with the Pollexfens — who were his mother’s side of the family — once for as long as six months.
“He had, of course, spent much time here as a boy. He came here from Liverpool on at least some of these occasions on the boats owned by the Sligo Steam Navigation Co., which was a Pollexfen company. It was a 30-hour journey and sailing on a relative’s boat saved the impecunious young Yeats money. The letters which he wrote from Sligo give a vivid picture of his life here.”
Example
At that 1990 ceremony, Dr. Quigley said they needed Yeats for his example of the fusion of the national and the cosmopolitan. No nation since the beginning of history, he said, had ever drawn all its life out of itself.
The sculptor, Rowan Gillespie, was born in Dublin in 1953, and lived in Cyprus, England and Norway until 1977 when he returned to Ireland.
Rowan’s expertise in bronze casting, a craft he learned at the age of 16, gave him the possibility to express himself freely in this medium without being hindered by the technical problems which are so closely related to sculpture. All bronzes are casts and finished by the husband/wife team in the studio.
The mayor of Sligo at the time, Clr. Roddy McGuinn, said the sculpture commemorated a great man who made Sligo his love and who, in his lifetime, produced vast quantities of literary works which were becoming more and more and more important with the passage of time.
“In his lifetime, the works of Yeats have put words like Knocknarea, Benbulben, Glencar, Dooney Rock, Maugheraboy and numerous other local place names into almost every language in the world.
Worldwide
“Yeats value in bringing the best of Sligo and its surroundings to the notice of a worldwide audiences of immense importance to Sligo. It is therefore most important and indeed quite essential that there should be located in Sligo a suitable memorial to such a man. This memorial gives recognition the genius of Yeats in his own place. It will be a focal point for the committed students and visitors who come to Sligo to see at first hand the places which inspired his genius,” said Mayor McGuinn.